GameOn Apps: The next step for GameOn Extensions.

The GameOn platform has seen hundreds of applications being built by developers for GameOn users that cover all sorts of different uses. Whether it be a simple extension for accessing a game wiki or an extension that allows you to access your favorite online media service, GameOn has an extension for you. It’s only natural that we would look at this platform for users and developers and look at what we could do different – what we could do better.

Will I have to update my extensions?

The good news is that GameOn Apps are still built on the same Code LX and code base as GameOn Extensions and making your GameOn Extension into an app is an incredibly easy process that shouldn’t take you longer than an hour. We’ll be bringing out some tutorials to help you with this closer to the date.

How do GameOn Apps work?

We’re going to do something a little unorthodox here and show you an upcoming release of GameOn that features a new design and new features. We’ve never shown off a pre-release version like this, as we like to keep the surprise – but this release is the only release that supports GameOn Apps and the only release thus far that we can really use to show them off to you.

GameOn Apps will be displayed in a new “Apps” tab that will replace the former “Driver”, “Launcher” and “Vibe” tabs. 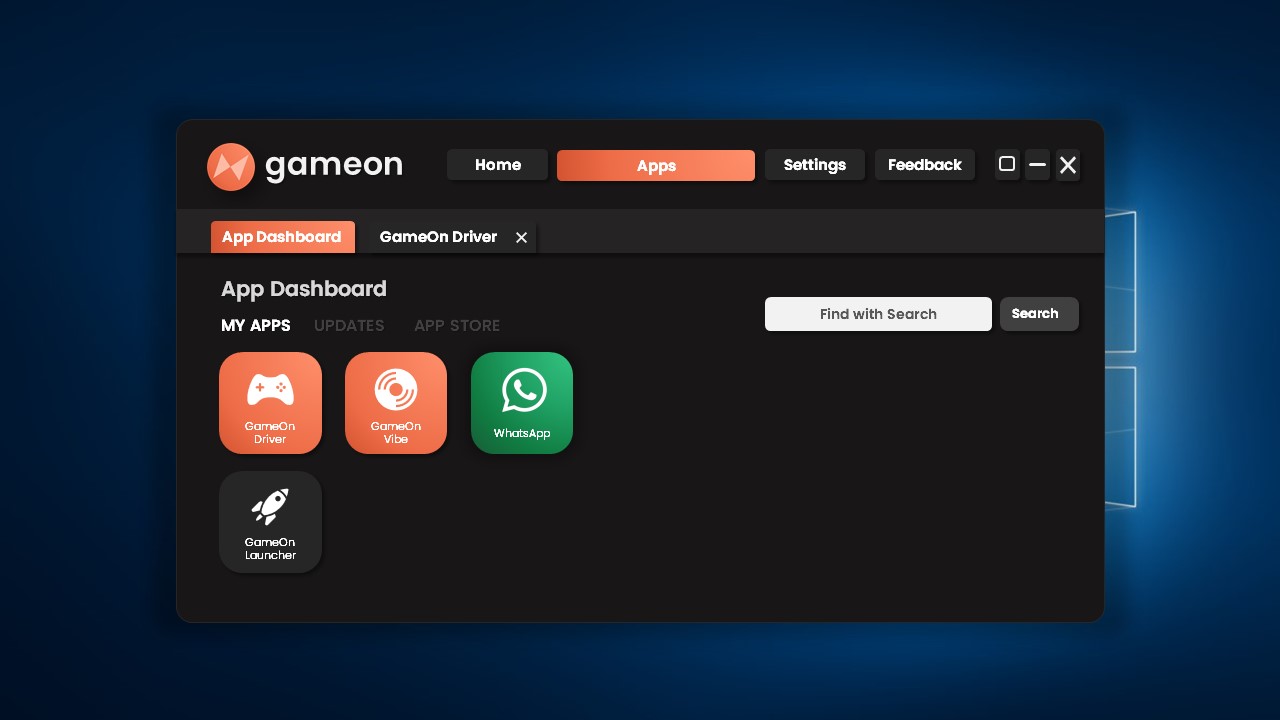 The apps tab will launch a new tab called “App Dashboard” that will be the start screen for launching GameOn Apps. Clicking on apps will launch them in a new tab that allows you to jump between GameOn Apps easily. You can also access the GameOn App Store (formerly Extension Library) to install new apps.

By default, this page will contain GameOn Driver, GameOn Launcher and GameOn Vibe, however they will be blacked out like GameOn Launcher is in the screenshot. Clicking on these blacked out apps will take you to the store page to install them. You can have apps in your library that are not currently installed on the PC. Here is an example of the install page: 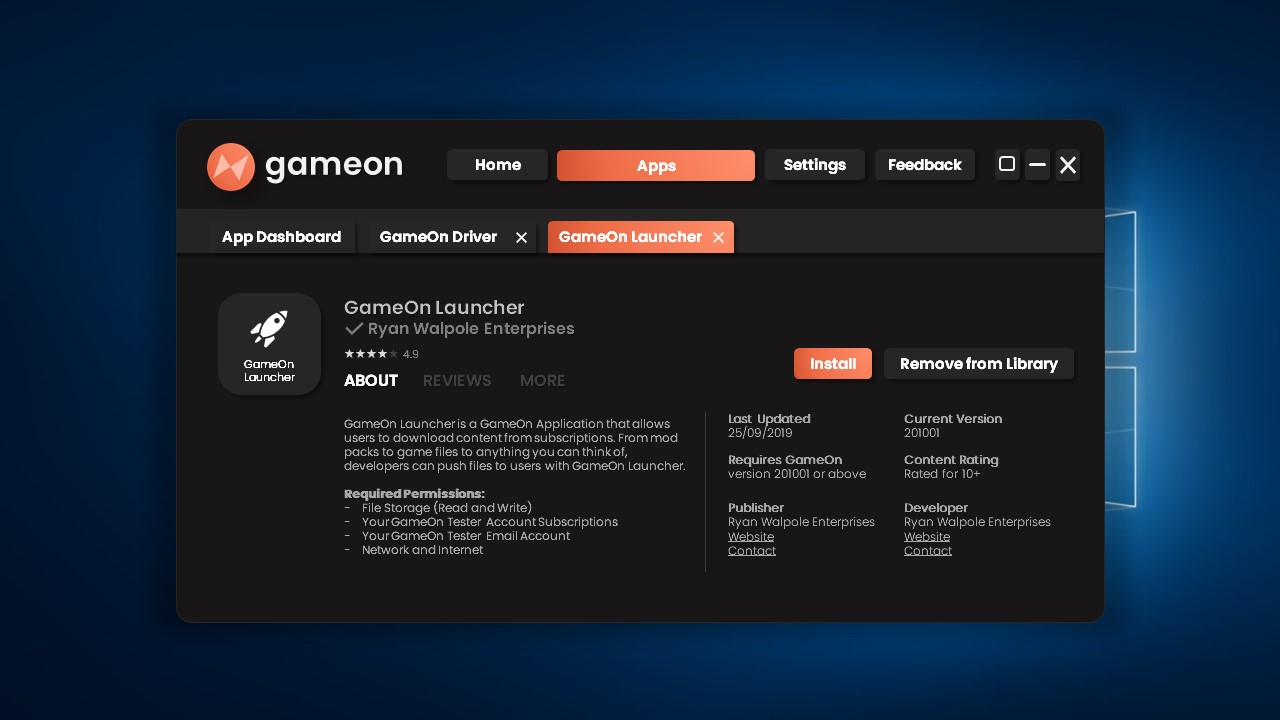 And finally, here’s an example of what GameOn Driver looks like while open in it’s own tab. We’re going to show you the “Credits” page as to not spoil anything about the new version of GameOn Driver that we’re testing! 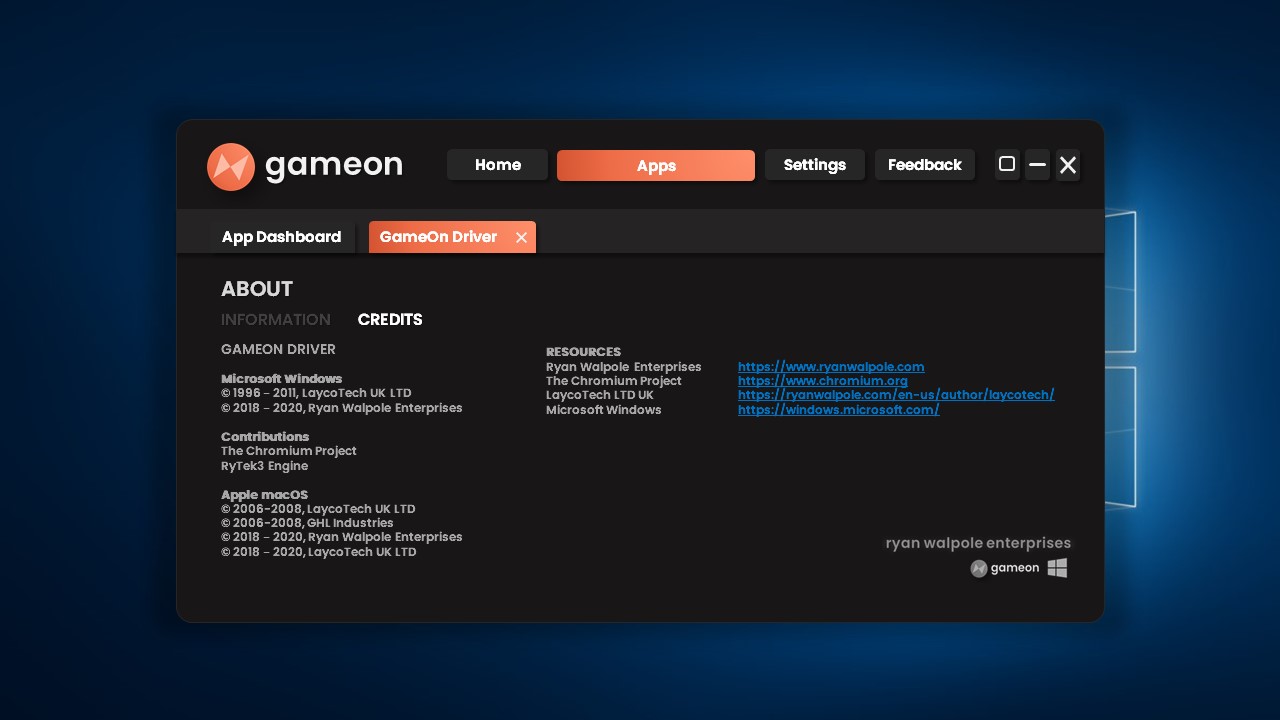 The GameOn Extensions Library vs the GameOn App Store

The GameOn Extensions Library and the GameOn App Store are essentially the same thing. They are both a location that can be used to download GameOn Apps (and still any extensions that are using the old code). Think of it as basically a name change! It’s important to note, however, that we’re taking the GameOn Extensions Library (Web) offline indefinitely. We just weren’t seeing much of a demand for the browser version, as most people were downloading their extensions in-app.

Will this include changes to the Code LX Libraries that are currently used for GameOn Development?

Updates to documentation and the GameOn Developer Toolkit will happen in the following weeks.

As a developer, you’ll be able to get your GameOn Apps ready (and update your GameOn Extensions) shortly. We’re hoping to have some resources available open to you by mid to late October.

As a user, you’ll be able to get your hands on the new GameOn Apps as soon as we launch the proposed update to GameOn that you can see in the images above. At the moment, the road-map for this update is hopefully early to mid November. Whilst we can do this rollout earlier, we want to give developers the opportunity to play with GameOn Apps and get their feedback first. This will help us make sure that they’re the best that they can be.